By Caron Lyon from PCM Creative

Show me the landscape

Perks, What do I have to offer?

On reflection and the discovery of this graphic (see below), crowd sourcing can be seen as an umbrella term. I often talk about the landscape of social media and its associated technologies but the analogy of sheltering your crowd beneath a brolly has a nice resonance. 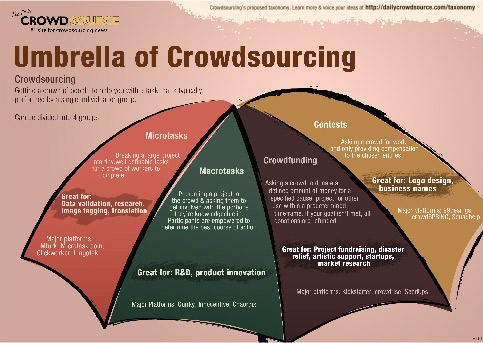 Microtasking is in essence the collection of or processing of small tasks to complete a larger task or aggregate data.

An excellent example of this is the UK Snow Map – http://uksnowmap.com created by @benmarsh

This site searches Twitter for real-time snow reports and displays them on the map. Tweet the hashtag #uksnow, your location (postcode, town name or geotag your tweet), and rate the snow that is falling out of ten (0/10 for nothing - 10/10 for a blizzard). You can also include the depth of snow (cm or inches), attach a photo and add a description to your tweet.

Story – I was due to attend a meeting in London but literally overnight a massive bout of snow fell. The rail line's website was not updated and was clearing overloaded as it continually crashed.

I had to get on the train before it was polite to call mobiles, it was early. Was it snowing in London? Was there any point in venturing out? I asked my twitter network and this was the service I was directed to. The more data contributed the more reliable the resulting output.

I did not travel to London that day partly because of the responses I received from my Twitter network but also because the Snow Map reflected the snow outside my window and the reports coming out of London were worse. Seeing the news I know I made the right desicion.

Macrotasking in essence is the collection of knowledge and ideas. Old style forums and buletin boards would fall under this category. Collaboration on research and development for projects, programs or articles is a valuable use of Macrotask based platforms. A simplistic example is the Question and Answer forum platform Quora. This crowd sourcing tactic often follows a supply and demand perspective I'll look at this further in post 3.

A fully-fledged ideas crowd sourcing platform if you want to take a look is Crowdicity. But this series of posts are about understanding crowd sourcing and its application to generate income.

So remains Crowdfunding and Contests.

At this point a word of warning. As creatives we are in danger of finding ourselves in "profit share" or "good for your portfolio" projects none of which feed, clothe or put a roof over our head.

Contests can have you submitting work you design to a brief where only one design wins or less ethically where the organiser takes the best elements from all the entries and commissions a designer. Tread carefully. I am going to concentrate on making money and funding to bring money in without outgoing speculation. With contest crowdsourcing you are the crowd. Writers and designers are particularly vulnerable to this crowd source mechanism.

I have reserved crowd funding until last as it’s important to understand the crowd sourcing landscape or umbrella. In the next post of this series I will reflect on audience and where you are in respect of audience.

To close this post I want to ask you:

Where is your existing audience/community? What relationship do they have with you, your company, organisation or freelance practice? What do you have to offer?